As we all know, every king wears a crown… Although I do know it has become a bit out of fashion ; apart from maybe the British Queen, who still wears one?  I have never seen our king with a crown, and I even wonder if he has one. But still, the Belgians have an official Coronation Feast, even though it has nothing to do with our Royals, and everything with Saints. For this you must go to the city of Tongeren, Limburg, every 7 years. 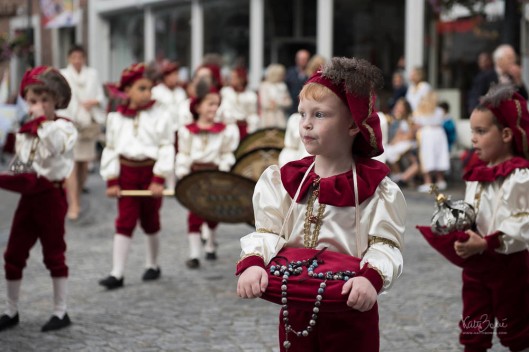 So that is what I did. I drove down into the deep Limburg, close to the boarder with Wallonia (our French part), close to the German Belgian part (yes, we do have a German part in Belgium, and German is an official Belgian language), and the Netherlands. It is so far away from where I am staying (close to Bruges and Ghent), that is seems like another country. The language spoken is a strong Limburg dialect that sounds so odd to me that I was doubting wether they were speaking Flemish or German, and I had to constantly ask people to repeat what they said as I didn’t get it the first time. It is about 150km from where I am staying. A mere 1:30h drive. This is Belgium.

Tongeren is small town in the south east of Flanders, with an oversized basilica (build in the 13th C and UNESCO heretage). It has played an important role in history. We have all heard of Ambiorix and the Eburones, who angered Ceasar by ambushing his army and thus killing about 9000 of his men. This Caesar, enraged and humiliated, then extinguished the whole tribe and gave another Germanic tribe, the Tungri, permission to settle in the area, and thus Tongeren was created.

Because of its strategic position it got the status of Municipium and Civitas, but the glory didn’t last. After the Roman era it came into decline and although importance went up and down over the centuries, it never returned to its former Roman status of importance. Today it is known for its Gallo-roman museum, for its statue of Ambiorix, and for the septennial Coronations Feasts.

From the 14th century on, every 7 years for the duration of 2 weeks, the relics of the church were put on view for the pelgrims to see, until it was abolished by the French in 1790. It wasn’t until 1890 that the Coronations Feast, with procession like we know it today, came to life, after the bishopric of Luik received permission for a Canonical Coronation of ‘Our Lady Mary Cause of our Joy‘, by pope Leo XIII.

Unless there was a war going on, it has taken place every 7 years ever since, and is today at his 18th edition. People from Tongeren date events from before or after a Coronation, and tell each other which one was the last one they saw. It is an important event in which 3000 of the 30,000 inhabitants, from newborn babies to elderly in wheelchairs, and all ages in between, participate in the procession. The others helping behind the scenes or standing in the streets watching the story telling procession pass. It shows several events in Marys life, and of course the statue of Mary herself joins the walk through the town. And afterwards, just to get a good view on things, you can see the whole story replayed during an evening open air play.

It is a 1 week event, with 4 processions, followed by an evening play and other events; including an photo exhibition. So now that I have put Tongeren, Limburg on the map, hop in your car and drive over. There are 2 more processions on the way (Friday the 8th and Sunday the 10th of this month), and hurry up, if you miss it you must wait another 7 years to get another chance. It is a nice area, and a cosy little town. Make it a day trip, and visit the photo exhibition and the Teseum. You can either reserve a ticket for the procession or take your own chair and sit where ever alongside the roads, but you will need to buy a ticket if you want to see the open air play which, unfortunately, is sold out.