Marsepein, sinterklaas, speculaas, Why on earth

I thought it’s about time I taught you some Belgian/Dutch tradition. The tradition of Sinterklaas, the “original” Sante Claus.

Sinterklaas is a saint who lives in Spain. Every year he comes to Belgium and Holland with a steamer, just before the 5th of december. That is his day. Or better, his night. That night he goes from door to door, he on his horse, his helpers on foot. Actually he doesn’t really go from door to door, he goes from chimney to chimny, over the rooftops. His helpers are called Black Jacks and they carry big bags with toys (and empty bags to put the bad children in, but that ‘s been getting out of use these days). If these helpers are “real” blacks, if they are black because their job is delivering toys to kids through the chimney, is not known. Personally I would go for the last option, as the 9,999 out of 10 they are whites with a painted face.

Traditionally, the “goede sint” (the good sint), brings toys, chocolate in the shape or sinterklaas or his black jacks, marsepin in different shapes, and biscuits called ‘speculaas’. The only thing the kids have to do is put their shoe together with a carrot and a sugar cube (for the horse) in front of the chimney, if possible with a letter to the sint (although nowadays they an e-mail is OK), and sing a lot of sinterklaas songs. The best thing is that although sinterklaas is known as a big friend of the children, he remains their friend, even when they grow up. The Holy Man even brings his sweets to adults… Fortunately. Because chocolate, marsepin and speculaas are my absolute favourite sweets.

This is our first sinterklaas here in Argentina, and I needed a bit of imagination to organise it here. I made my own marsepin and speculaas (brought Speculaas-herbs from Belgium), and I found the sinterklaas chocolate figure standing next to Santa Claus in the El Viejo Oso. Unfortunately very small and Mr Black Jack is missing.

I found some real original sinterklaas presents for my kids, although almost adults, at this time of the year they consider themselves babies. They even write the traditional sinterklaas letters, and if I want, they would sing the songs. Yes. I am late. He was supposed to come yesterday, but he was too busy in Belgium. He is on the plane to Argentina as we speak, and will come to our house tonight. The shoes are waiting. We ran out of carrots, and they don’t have sugar cubes here. So in the shoes, I see an orange and an apple. Let’s hope sinterklaas’ horse likes fruits!!! 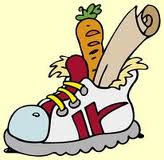