Teatro Colón has always been something magical. Is it because of it’s beauty, it’s program, it’s reputation? Or is it because it is so hard to get in?

Going to a show was on my to do list ever since the first time we came here in 2003. Somewhere I had read that this opera used to be top 3 of the world. Next to the Scala in Milano and the Opera in Paris. Maybe that was a bit exaggerated, but whatever may be the truth, as soon as you enter the theatre you feel it’s grandeur. Even today (some) people still dress up as they used to do in the past century, unlike people on the streets, here you can still see people wearing jewels and fur coats. For a moment you forget the problems Argentina has.

But since last year Teatro Colon is back, and, unlike last year where it was constantly sold out, it is now even possible to get tickets. After going to the opera ‘Pelléas et Mélisande’ last month, I had now bought tickets for a ballet, my first in Colón.

Onieguin (Onegin), is an extremely romantic ballet, based on the poem by Alexander Pushkin, music by Tchaikovsky, choreography by John Cranko.

It is the story of bored Russian aristocrat, who rejects the love of the young Tatiana. He then starts flirting with Tatiana’s sister which leads to a duel with her husband, where Onegin kills the husband. Years later he meets Tatiana again, she is than married to a prince, and she turned out to be really irresistible. Onegin now regrets to have rejected her and tries to get her back. However, she is faithful to her husband, and sends him away.

The music is absolutely fantastic -I am a real Tchaikovsky fan- I particularly loved the alt violins (my favourite instrument) in the last dance.
The ballet itself is not just dancing, but also acting. Although the dancing wasn’t always in coordination with the music, and the group dancing wasn’t always synchrome, I really enjoyed this ballet. The decor was really stylish and so were the costumes.

My favourite scene was the last one, the dance between Onegin and Tatiana, which was extremely passionate. The end is abrupt. I loved it. 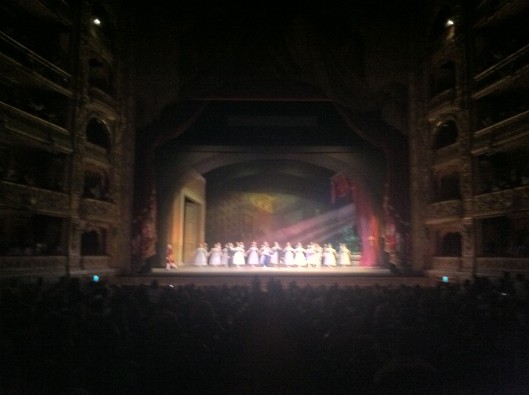 4 thoughts on “Love and Passion”