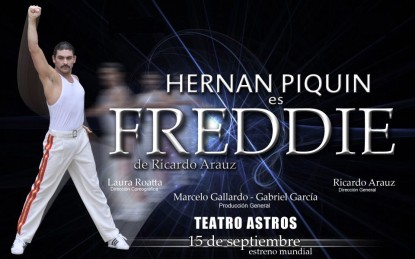 Hernán Piquin is Freddie in the dance performance on Queen’s music.

Hernandez is an outstanding Argentine balerin, who studied el Instituto Superior de Arte del Teatro Colón. In 1985 he is invited as honory student in the English National Ballet school and the June Ballet in France where he danced parts as soloist and principal dancer. In 1992 he becomes part of the Ballet Estable del Teatro Colón.

In 2005 he receives the Price of “María Ruanova” by the Argentine Dance council.

Now he is Freddie Mercury, the show is not just a dance performance on Queens’s music. But through dancing Hernán and his dancers represent the life of Freddie. They take you to India and Zanzibar, through his decadent life in the UK to his illness which lead to his death. He is represented as he was : gay, so be prepared to see men kissing and hugging each other. There is also a gay sex-scene that doesn’t leave much to your imagination and which I am sure is shocking to many people.

Maybe just in the beginning Hernán is a bit too much of a dancer and does not express enough force and strength to represent Freddie, who was a very powerful person. But after a while this changes and he becomes one with the singer.

The music is catchy. Although Queen’s best period was before my time, I know most of the songs. It was funny to see al these older people, dressed up in suits, half bald, wearing glasses, singing out loud with the music and clap their hands. It takes just a second to imagine them in their teens in a rocking outfit with long hair. Queen certainly does that to you.

It was a fabulous performance, that I highly recommend.